Some time ago I published a book of cartoons as a present for my wife on our wedding anniversary. I thought that I would make some excerpts available on this blog in the hope that it would revive interest in the sadly undervalued work of genius.

Below is the short introduction that prefaced the book, some words of praise from some kindly folk who reviewed it, and some sample pictures for your delight and titillation:

A book like this is usually published after the author is famous. For instance, a member of a 60s pop group, one half a comedy duo and the creator of a hit sitcom to (not) name a few have all published books of this nature. However, as I consider my prospects of becoming famous as vanishingly small I thought: why wait?
This book is dedicated to my wife. We met at work and every day I would draw her a little picture, which she kept. The majority of this book is a compilation of some those pictures, divided under four arbitrarily named headings that bear little or no resemblance to their content. The rest of the book is the product of my warped little mind in more recent years…enjoy.

“I was blind before I read this book. Not only did Scriblets cure me, but I can now see better than anyone else who has ever lived.”
Anonymous

“…if possible, reading Scriblets is even better than intercourse with my wife or girlfriend.”
Anonymous

“Artwork: childish. Poetry: fatuous. Prose: shallow and tedious. However, when one puts it all together one is left with a work of such wit and sagacity as to leave one quite breathless.”
Anonymous

“This book is a monument to humanity…” “…all future works of art must be held against it, and are doomed to wither in the comparison.”
Anonymous

“..such is the sheer naked power of this book, after reading it, I felt as if I had been raped…but in a good way.”
Anonymous

Kevin the tortoise and his heat seeking porpoise 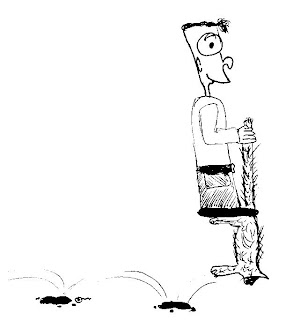 ChristianTat and his pogo cat 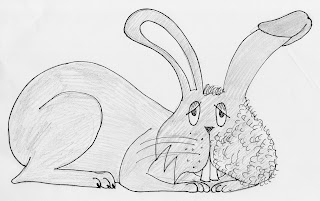 Mr Rabbit has no tail, although oddly enough, people often have to have this pointed out to them.

...and no one wants to read it. Well, no agent at any rate. I have decided to admit defeat, give in to vanity, and publish the blasted thing myself. I've created a new blog to document the process. I'm not sure why - it just seemed the thing to do.
Posted by Unknown at 11:48 pm No comments:

Ayaan Hirsi Ali is a Somali born ex Muslim who, having been brought up in Islam and with the prospect of a forced arranged marriage to a relative stranger, fled to the Netherlands in 1992. She became amongst other things a translator, a politician and a public speaker, speaking out for women’s rights and against the threat of Islam. In 1994 she collaborated with Theo van Gogh, a Dutch film maker, to make a short film called Submission, which portrayed many of the horrors that face women in Islam.

Not surprisingly the film was condemned by Islamic fundamentalists and both Hirsi Ali and van Gogh were advised to seek protection. Van Gogh chose to ignore that advice and was brutally murdered as a result. On his chest, his murderer pinned a warning to Hirsi Ali that she would be next. As a result, she fled to the United States were she continues to speak out against Islam and until recently her protection was paid for by the Dutch authorities.

Earlier this year, she was told that her protection would no longer be funded while she lived on American soil. Given that her protection would cost a lot more, and be significantly harder to maintain, were she to return to the Netherlands (it is there that she would be the most vulnerable) she has decided to remain in the States and to fund her own protection. This protection requires 24 hour bodyguards and must be maintained whenever she needs to travel. Obviously this protection very costly and although author of two books, it is well beyond her means to sustain for very long.

In response, the American Author Sam Harris has set up a trust which can accept monthly or one off donations which will help fund her protection.

If anyone would like to donate to this trust the following link has all the details of how to subscribe as well as further links to related articles by Sam Harris, Salamn Rushdie, Christopher Hitchens and others.

Ayaan Hirsi Ali recently spoke at the Athiest Alliance International Convention in Washington DC. Here is a link to her talk in which she describes her story.

The Richard Dawkins Foundation has produced a DVD of the AAI Convention which can be purchased here. All proceeds go to the Ayaan Hirsi Ali Security Trust.

I think that she is an amazing and courageous person, and so I have subscribed to the trust. I urge anyone who reads this to follow these links with a view to doing the same.
Posted by Goatboy at 12:04 am No comments: I succumbed to peer pressure about a month ago and started a Facebook account. I feel that I have given it a fair crack of the whip, and once the initial novelty wore off I found it to be a load of childish boollacks. I have, therefore, deactivated my account and in doing so I instantly felt more grown-up and mature.

I started this blog in 2005 and, disappointingly,  this post, written nearly 5 years ago, represents my biggest impact on the internet to date.
At the time of writing it has been viewed 4,531 times and received 177 comments, the most recent of which is only a week old.
Admittedly, this level of traffic is pretty paltry by today's standards but, be that as it may, it remains my most effective advertising platform. With this in mind, I am going to be an absolute whore and use it as such:

I have written a book...

...and no one wants to read it. Well, no agent at any rate. I have decided to admit defeat, give in to vanity, and publish the blasted thing myself. I've created a new blog to document the process. I'm not sure why - it just seemed the thing to do.
The book is called 'Unbelievable: Christianity as a House of Cards', a title that, I hope, speaks for itself. A brief synopsis of the book can be found here, but the following is the blurb that adorns the back cover, as well as the description section on the Amazon web page:

What happens if, for the sake of argument, one indulges the faithful by accepting as many of their claims as possible?

What happens if one accepts the existence of God and the Gospel account of Jesus?

In short, what happens if one takes Christianity seriously and then plays it at its own game?

It would appear that even with these rather charitable concessions, Christianity still doesn't make sense.


If any of you fellow Facebook haters want to buy the book, please follow this link where you will find further links to Amazon, Amazon Kindle, the iBookstore, and NOOK books.
You would be making a chubby nobody very happy, and that should be reward enough in itself.